A #COMPASS was found at #Lothal used for Navigation system 5000 years ago.

A bead factory was also discovered at #lothal 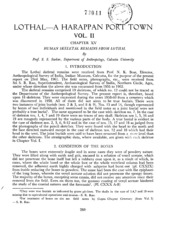 #Lothal was well planned dock (discovered in 1954) and one of the ancient sites of Harappan culture, It was well ahead of its time. It was a linking maritime commerce route to Mesopotamia around 2k-3kBC.

India – HarappaIndia – India – Harappa: The vast mounds at Harappa stand on the left bank of the now dry course of the Ravi River in the Punjab. They were excavated between 1920 and 1934 by the Archaeological Surve…https://www.britannica.com/place/India/Harappa#ref485025
web.archive.org/web/2020062412…

Please see seals and terracotta objects from Mohanjodero and Lothal. The unique designs, Masts were mastery of Indian Ship manufacturers.

Critical Ship building technique is use of KEEL (to stabilize) ships.
This technique was missing in earlier Ships from messopotamia this came from Indus civilization.

Keel | ship partKeel, in shipbuilding, the main structural member and backbone of a ship or boat, running longitudinally along the centre of the bottom of the hull from stem to stern. It may be made of timber, metal…https://www.britannica.com/technology/keel-ship-part

Another Critical ship making technique unique to Indus was ‘Edge Joining’
Indian ships were famous for no iron joints. (i.e. no iron nail in the ship). They used a natural property of Wood expansion when soaked. What they call is ‘Mortise and Tenon Joinery’
@desertfox61I
8/n

Medallion from Bharhut, depicts 3 man on ship in the sea, where external portion of ship is swallowed by giant fish and internal portion re
mains intact
This proves Indus built ships in decks in such a way that if one part gets damaged Ship would continue to work
@Nupur_Ahire
9/n

According to a study by the @CSIRNIOGoa, Indians had knowledge of harnessing monsoon winds for navigation long before Hippalus, the Greek mariner and acclaimed discoverer of monsoon winds

Navigation began in India: Indus Valley Indians used monsoon winds for sailing – The Economic TimesBengaluru, Dec 4 (IANS) Indians had knowledge of harnessing monsoon winds for navigation long before Hippalus, the Greek mariner and acclaimed discoverer of monsoon winds, according to a study by the…https://economictimes.indiatimes.com/news/science/navigation-began-in-india-indus-valley-indians-used-monsoon-winds-for-sailing/articleshow/61912277.cms?from=mdr
@LevinaNeythiri
Hang on take a break. more to come

10/nIndus (Meluha), Masan (portions of Oman, UAE, Iran), Dilmun (portions of Dammam, Bahrain, Qatar) were trading partners with Messopotamia.
At its zenith, Indus were 5 Million 20x of messopotamia were 0.3 Million.
Imagine GDP of India at that time.
@Aabhas24
@harshasherni
11/n

Recent DNA study of samples taken from 2500 BC indicates that the mtDNA which arise in Indian subcontinent is still present in inhabitants of today’s while it is extinct in habitants of Mesopotamia.
Indication of ‘Aryan Outward Migration’. mtDNA from the Early Bronze Age to the Roman Period Suggests a Genetic Link between the Indian Subcontinent and Mesopotamian Cradle of CivilizationAncient DNA methodology was applied to analyse sequences extracted from freshly unearthed remains (teeth) of 4 individuals deeply deposited in slightly alkaline soil of the Tell Ashara (ancient Terqa…https://journals.plos.org/plosone/article?id=10.1371/journal.pone.0073682
@PhasistB
12/n

Some of the Indus articles found in Mesopotemia excavations.
14/n

Kenoyar has reason to believe that Indus were living in UR working as agent or running local shops to handle large volume of business.

543 BC, Prince Vijaya with 700 followers sailed to Ceylon and became King later.
Mentions of Big ships in Jataka volume IV.
Alexandar army returned on ~1000 ships which were made in Sind.
(citing few for paucity of space)
@VertigoWarrior @SortedEagle

Sri Lanka – HistorySri Lanka – Sri Lanka – History: Sri Lanka has had a continuous record of human settlement for more than two millennia, and its civilization has been shaped largely by that of the Indian subcontinent…https://www.britannica.com/place/Sri-Lanka/History#ref388477
16/n

Aryabhta and Varahamihir, having mapped the positions of celestial bodies, developed a method of computing a ship’s position
A magnetic compass was being used around the 4-5th century AD (Matsya Yantra), with iron fish that floated in a vessel of oil
indiannavy.nic.in/content/early-…
19/nBetween 5-10th centuries AD, the Vijaynagaram and Kalinga were ruling over Malaya, Sumatra and Western Java.
The daily revenue eastern regions in 844-848 AD was estimated at 800 KG gold.

In 1292 AD, Marco Polo described Indian ships as ” …built of fir timber, having a sheath of boards laid over the planking in every part, caulked with oakum and fastened with iron nails.

Journal of the First Voyage of Vasco da Gama to India, 1497−1499This manuscript is the only known copy of a journal believed to have been written on board ship during Vasco da Gama’s first voyage to India. The lost original of the journal most often has been attr…https://www.wdl.org/en/item/10068/which mentions that Indian ships were as large as 800 Tonnes. (Note Vasco’s Ship was 100 Tonnes)

Having gone through the glory I can confidently agree to @Bharathgyan

During 17th century, Shivaji owned formiddable naval fleet. Shivaji developed several docks.
in 1698, Conajee Angria took over the command of Maratha fleet and never look back untill his death 1729. Thereafter Shambooji and Toolaji carried over the glory till ~1755
22/n

1529 marks decline of Indian maritime power with the arrival of Portugese
Portugese imposed a system of licence for trade
The harbour finally ceded it to the British in 1662, under a marriage treaty b/w Charles II and Catherine of Braganza
indiannavy.nic.in/content/early-…
23/n
@fayedsouza

Despite western domination, Indian shipbuilders continued to produce Ships displacing 800 to 1000 tons superior to their British.
Agitated British shipbuilders on the River Thames protested against the use of Indian-built ships.

Consequently active measures were taken to cripple the Indian industry. Nevertheless, many Indian ships were inducted into the Royal Navy, such as HMS Hindostan-1795, the frigate Cornwallis-1800, HMS Camel-1806 & HMS Ceylon (1808).

A LEADER was decimated by colonisers.
25/25
EOT

COVID-19 | Challenges and Opportunities for India !

Evolution of USD as forex

India is 3rd in terms of GDP at PPP